Esailama Artry-Diouf - I was inspired to dance by the power that exist in music and dance to mobilize people and transform people's feelings and beliefs. Dance has shown me how activism exist in the arts for over 30 years. I dance to keep certain traditions and worldviews alive. My hope for the future of West African dance and culture is to be seen as a catalyst for social movement and progressive change.

Madiou Diouf hails from the United States, Senegal and Liberia, West Africa. Growing up with a strong percussion background he was first taught by his father Dr. Zakarya Diouf at a young age to play both djembe and sabar drum orchestra. In 1998 Madiou landed his first big gig, playing with renowned musicians in the '98 Olympics followed by the 2005 BET Awards opening act. Currently a Sound Arts major at Expressions College for Digital Arts he is also a producer and founder of Spoken Hands Productions.

Ibrahima O. Diouf began dancing professionally at the age of 12 with Diamano Coura West African Dance Company led by Naomi Diouf and Emmy Award winner Dr. Zakariya Diouf. Alongside his national and international work with Diamano Coura he has studied with other artists and companies including: Kankouran Dance Company led by Assane Konte in Washington, DC, Youssouf Kombassa in New York, the late Abdoulaye Camara former Director of the National Dance Company of Senegal and Alabatu Dance Company in New Orleans, Nimley Napla former Director of the Liberian National Culture Troupe and the late Kemoko Sano former Director ofLes Ballets Africaines (Guinea). Spreading his dance wings into Hip-Hop and Drill Team Ibrahima has studied with NewStyle Motherlode led by Corey Action and Teela Shine and Mixed Blues. Ibrahima is currently will be attending the Arts International University for Art and Design. 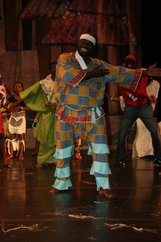 Nimely V. Napla is a master dancer, craftsmen, costume designer, choreographer and former director of the Liberian National Cultural Troupe. Nimely came to the United States in the early 1980s while touring with the Cultural Troupe to perform at the Louisiana World Exposition and share his artistic talents and vision. He was awarded a certificate from the Commissioner General for his service to the New Orleans SPCA classic horse show. In August of the same year he also began work with the New Orleans Public School System’s Artist-in-School program.
Nimely has been awarded a Certificate of Excellence by former Minneapolis Mayor Sharon Sayles Belton, and has performed and created woodcarvings at the Black Arts Festival in Atlanta, the 1996 Olympics, and as an educator with numerous school districts in Minnesota, California, and Louisiana. As costumed designer and choreographer he has been commissioned by renowned companies such as Diamano Coura West African Dance Company based in California and Kankouran Dance Company based in Washington, DC.

La Donna Higgins has been performing professionally for the past 17 years with such companies as Diamano Coura under the direction of Naomi and Zakariya Diouf and Kankouran Dance Company (Washington D.C.) under the direction of Assane Konte. La Donna has also performed alongside renowned artists: Senegalese Duo Ousseynou & Assane Kouyate, Azziz Faye and Marie Basse-Wiles to name a few. Touring world renowned showcases such as the San Francisco Ethnic Dance Festival, Africans are Coming, People Like Me, and Yerba Buena Day of Arts Festival, La Donna brings to the stage the cultural traditions of West African dance along with her vibrant personality and captivating smile. For La Donna: “African Dance is my religion. I eat, think and live dance. African Dance has taught me the ways of my ancestors and guides me in my day to day life. Every rhythm and every movement carries me and gives me that unspeakable peace in my heart.” 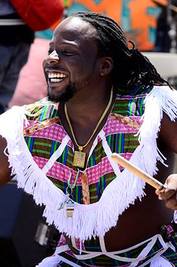 Darian La Foucade hails from Trinidad and Tobago, West Indies. In 1993 he moved to the San Francisco Bay Area and began studying various styles of dance and drumming with Dehcontee Liberian Dance Company. Two years later he joined Diamano Coura West African Dance Company developing his skills in choreography while working as an apprentice teacher under Diamano Coura company directors, Zak and Naomi Diouf, at Berkeley High School. Darian has performed professionally in major theatre venues and universities in San Francisco, New York, Minneapolis, Washington DC, Houston, Las Vegas and Taipei, Taiwan. In 1997 Darian was awarded the Barkley Philanthropic Society Fellowship Award, continuing his mission to impart to all age groups the knowledge and skills of West African dance and drum history and culture that he has acquired over the years and continues to learn.

Dedeh jaimah- La Foucade began her professional career in dance over 20 years ago. Through her study and performance of West African dance she has been able to stay grounded to her Liberian roots and pass her embodied knowledge down to her children and generations to come. She began her professional career in 1993 with Dehcontee Liberian Dance Company, based in Oakland, California and by 2000 had advanced to Assistant Artistic Director. In 2005 she decided to expand her repertoire of dance and joined Diamano Coura West African Dance Company. With Diamano Coura she became versed in dances from the regions of West Africa while also furthering her understanding of Liberian dance culture. For Dedeh, dance is "the rhythm within that moves me through every aspect of my life. Being a part of Diamano Coura is a wonderful experience that I wouldn't trade for anything in the world. There is such an extreme amount of knowledge that not only helps me with dance but to also guide me through all aspects of life. I plan to continue dancing until my body and spirit won't allow me to. Dancing brings me balance, it completes me."

Tamika Davis's passion for West African dance began her sophomore year at Berkeley High School then continued on to classes she took at Laney and Alameda Community Colleges. From her dance experiences in high school and through college she realized that all she wanted to do was to live, feel and breath West African dance. She joined Diamano Coura in 2000, premiering in performances at the San Francisco Ethnic Dance Festival, Mendocino Ethnic Festival and other major engagements statewide. Her experience with Diamano Coura has continued to amaze her and she looks forward to the next 10 years of being one of "those who bring the message." 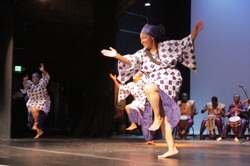 Danielle DeLane is a recognized and respected dancer in the West African dance community. She has been studying African dance for 22 years, with her first exposure coming from a small church in Berkeley California, where Betty Ladzepko (wife of C.K. Ladzepko) taught the children and youth of her church Ghanaian dance. However, it was not until Danielle began taking West African dance at Berkeley High School under the direction of Naomi Washington-Diouf that her interest began to flourish. With 22 years of African Dance experience, Danielle has performed 15 of those years professionally with Diamano Coura West African Dance Company. Danielle has performed on multiple US stages, and most notably, internationally with Diamano Coura in Taipei, Taiwan for the Maio-Li International Mask Festival. Danielle is a 2x ACTA Living Cultures Grant recipient, producing "A Celebration of Culture: Senegal" in 2013 and 2016 which staged 8 unique dance and drum pieces celebrating the rich and diverse culture of Senegal West Africa.  It is through the training received by Diamano Coura and with the support and confidence of other master artist throughout the US, that, Danielle’s work represents the next generation of artistry for West African dance and drum culture in Northern California.

LaTashia Bell hails from Oakland, California. She has performed and toured with Diamano Coura since 1993 throughout the United States and internationally. She believes that, "dance is my life's passion, my soul's joy."

Aimee Fields-Reed I've danced on and off my whole childhood, but started with Diamano Coura 5 years ago. My main inspirations to dance are my love for performing, and the physical and mental challenges and growth that come from the craft. I've always been involved in the performing arts, but mainly through music. When I first started dancing, it was purely for the exercise and fun. As I studied and increased my dedication to dancing, it quickly became more of a passion than just a good workout. West African dance has inspired me to be more active in my community and share the joy of dancing with others. What inspires me to dance today is the emotional and spiritual release and connection within myself when I dance. The excitement we create for our audiences is another great bonus! I dance for my physical, mental and spiritual health.  It also serves as a spiritual connection for me and those before me. I see West African dance as a way to connect deeper within myself and express myself creatively. 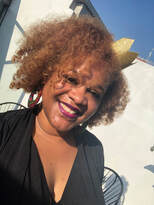 Cherese Brauer - I took my first class over 20 years ago. West African Dance changed my life because it helps me love, trust and celebrate my body. Dance continues to create space for me to be in deep communion with myself and others. Dance is delightful expression of joy and connection in my life that heals, challenges, and uplifts me. Through dance, I reconnect to myself, community, culture and my good ancestors.  My wish for the future of African dance is for it to continue to be a stable community of healing and joy that fortifies folx, especially people of color.
Diony Gamoso - I became interested in West African dance through a love of the music. I used to keep an eye out for performing groups touring through the Bay Area, such as Les Ballets Africaines because I loved to listen to the drums. Almost by accident, I happened to see a West African dance class being offered at Laney College that featured live drumming. I thought I'd give it a shot thinking, " if I don't like the dancing part, at least I know I'll enjoy the music". I'm so thankful to have been able to take the class, and for my teachers, as being introduced to West African dance has brought so much to my life! Dance  has been a blessing in many forms - good health, something fun to look forward to every single week, a challenge to both mind and body. Also, over the years, I have come to appreciate more and more all the friendships I have made, and community I am able to be a part of through our common love of West African music and dance. Additionally, the music and dance has served as a "window" for me to peak inside and learn about, and appreciate, other cultures.
Alkebulan Penda Ra - I have danced since 1990. It has guided me to the value I share in the expression of myself. I dance to embrace Harmony and Joy. My hope for the future of West African dance and culture is to be part of the expression and participation of social empowerment.