What is Your Review?
NEW YORK TIMES-June 2015
http://www.nytimes.com/2015/06/17/arts/dance/review-ethnic-festival-dancers-follow-the-footsteps-of-a-heritage.html?ref=dance#
Review: Ethnic Festival Dancers Follow the Footsteps of a Heritage - The New York Times
An annual dance festival celebrates the choreography native to the many cultures that have become American.
Read more... 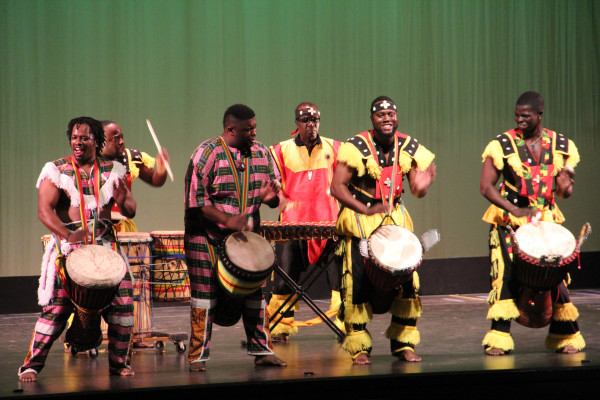 For one night, dancers at Oakland’s Skyline High School transported the auditorium’s occupants to the shores of West Africa with rhythmic drumming that reverberated through the room. Dancers stomped and moved rapidly across the stage, their energy captivating their audience. Then came the mystical sounds of the Kura, a West African 21-string instrument, which when plucked makes sounds similar to those of a harp and a guitar.

This was the 20th Annual Collage des Cultures Africaines (Collage of African Cultures), a partnership of local dance companies. Dedicated to celebrating the African Diaspora, the communities throughout the world of African descent, the event united over 100 participants, from musicians to artists, volunteers and local businessmen selling West African clothing and artifacts.

This year’s theme, listed on the front of the program as “reflections on where we have come,” included musical and dance pieces from around Africa. “But in the process of looking back, we have several people that were instrumental in the choreography of Diamano Coura,” said Naomi Diouf, the artistic director of the dance group and one of the founders of the annual performance.

Pieces like “Djembe love” celebrated Kimoko Sano, a choreographer with the African Ballet in Guinea, and included a collection of djembe (West African drum) pieces from different ethnic groups and different countries. Other choreography highlighted the Egyptian Nubians’ displacement from their land, where the Aswan Dam was to be constructed. The piece interpreted this moment through the “memory of village women collecting water each morning from the Nile River, a visage forever lost under the waters,” as described in the program guide.

Diouf and her husband Dr. Zakaya Diouf, otherwise known affectionately as “Mama Naomi” and “Papa Zak,” are behind the entire production. “Collage” was born out of a void left by the closure of an institute specializing in West African dances, she said, and so they created it to provide a space to a celebrate African dance and culture. After serving as the director of the Les Ballets Africaines (The African Ballets) and the National Senegalese Ballet, Zakaya Diouf came to the United States. While he was teaching at San Jose State, his students convinced him to open up a dance company focused on West African dance. He named the company Diamano Coura, which in Wolof, the Senegalese language, means “those who bring a message.”

“For Diamano Coura, our most important goal is really to use the culture to create a cohesive community,” said Naomi Diouf, “but yet still bringing an understanding and appreciation for African culture.”

As a high school exchange student from Liberia, Naomi Diouf came to the United States in 1974 to study computer science, but dance took her in another direction. “Music is my motivation,” she said. “When I hear music I have this movement that comes through my head that wants to go with that particular music, and so my body moves.”

More than 40 years later, Diouf is still following her passion. For over 20 years, she has taught West African dance at Berkeley High School. She said that the teaching happens in the Berkeley classroom, and once students finish their schooling, they are allowed to continue professionally at Diamano. “Berkeley High is one of our recruitment grounds for the company,” said Naomi. She has many loyal dancers who have followed her since they were students in her classroom over 15 years ago.

Jackie Graves, one of Papa Zak’s new students who is teaching English at Laney College, was in the audience Saturday night. “From the first opening drumming, I was just electrified, my body moving,” said Graves. “It’s a wonderful way to celebrate culture and people.”

Diamano Coura is currently fundraising for their 40th anniversary, which will take place later this year. To find out more about Diamano Coura West African Dance Company, click here.

"Both works looked at African tradition and how one maintains one’s soul integrity when one does not forget where one comes from. Insight spoke specifically of a young man, Ibrahima’s journey abroad. Before he leaves the village comes together to wish him a safe and fruitful sojourn. He returns years later to share his realization that “our past influences our present situation, however, it is the present that we have the power to change.”
By Wanda Sabir, Wanda's Picks December 2012


"African and African diaspora music and dance continue to inspire new generations of Bay Area residents. For the past 25 years, companies led by C K. Ladzekpo, Malonga Casquelourd, the Dioufs, and others have retained the core pan-African belief that one grows closer to both ancestors and the younger generations by keeping dance alive. Dancing with the spirits on Earth is a rehearsal for transcendence to the world of the ancestors. Saved by dance."
By D.M. Roche, NCM Culture Editor